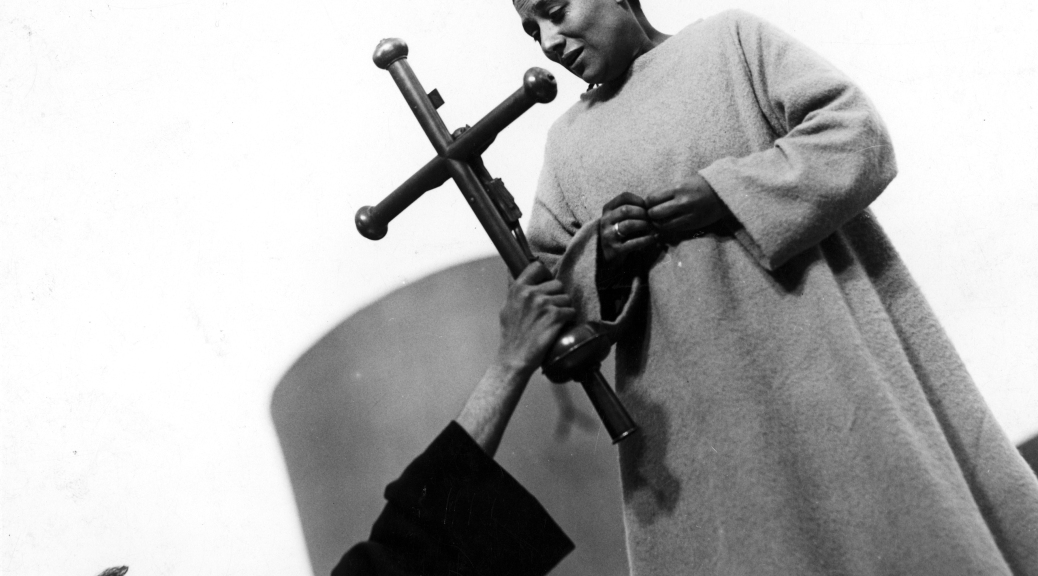 The first night, after tea, after rusks and helloes, the women gathered in the garden under the clock tower. A mist-belt Gethsemene of acacia, delicious monster, trimmed hedge. No questions were asked, no directions given. In the dark they wandered, following a teenager in a white shroud. She carried a petrified cross, barefoot on the devil thorns hidden among the gravel. Instinctively Mary approached to help the girl carry the load. But the chaplain raised his arms, telling the women to stand back. They were not to help the girl as she dragged this cross, heavy on her back, along a path indeterminable, through the monastery grounds, under a moon like milk.

The girl didn’t make a sound the first time she fell. But the second time, she yelped, and stayed on her knees for a moment, collecting herself. Mary stepped forward again, and again the chaplain raised his hand to her. In slow motion, in one motion, the girl picked herself and the cross up, and carried on through the darkest shadows of the garden. The women stumbled, unfamiliar in the terrain, in the heat of crowd.

When the girl fell a third time, the chaplain began to sing.

Were you there when you crucified our Lord?

Were you there when you crucified our Lord?

In the bus, the other women had sung the entire journey. They had sung hymns Mary hadn’t heard since her childhood in the Midlothian church, all Thees and Thous, tristis et afflicta, as if Vatican II never happened. Now the women had to be coaxed into praise.

Mary trembled. She would have cried, too, if she could process the thought of it. To her, this was a fresh hell, among the ferrous hills and petrichor bush of the Midlands.

It took six verses before the procession came to an end. Under a lit archway, a number of priests laid the girl on top of the cross in the middle of the stoep. The chaplain raised his hands again, not in censure, but to silence. A monk in black robes then extracted three thick nails from a sling bag, and knelt to the girl. With a hammer, emotionless, he battered each into the cross, as close to the girl’s hands as possible. The voices ascended.

The girl wailed with each wallop of the wood and lead. Mary trusted the monk was not hitting the girl, but she couldn’t be sure. With the vibrations her shroud began to shift, and she looked out on the crowd. Between the back of the heads of the other women, the girl’s face revealed itself to Mary. Bright eyes, staring straight and defiant. Scarred cheeks, bloating and sinking with each shout.

Mary counted the strokes of the hammer. The left nail took eighteen; the right, twenty-one. The monk, tiring, took the final nail, and placed it above the girl’s crossed feet. One, two, rhythmic, like clockwork, like heartbeat. Three, four. In the half-light she could see the musculature of the monk’s arm. The knuckle-wrapping veins, the forearm tendons like the underside of a leaf. It would be over soon, Mary thought. Perhaps soon they might get some sleep.

On the fifth stroke the monk’s grip slipped, and the hammer deflected off the head of the nail into the girl’s toes. A metatarsal crunch, audible over the distant cicadas. The girl stopped wailing, and grimaced instead.

In the church, the cross loomed illuminated. Immediately Mary knew the monks would not yet let the women sleep. Before Mass they were each given a shard of terracotta. A broken pot. In her seat in the hardwood pew, Mary rolled the shard in her palm, its roughness scraping out the miniscule valleys in the pads of her fingers.

The chaplain began a spoken Mass, smiling now. Mary eased into the routine, her brain on autopilot. Halfway through the kyries, she felt a ringing at her breast. Her phone, which she had been supposed to hand over to the chaplain when the bus first arrived. She snatched at it, fishing it out of her bra, searching for a button to silence it. She dropped the terracotta shard, shattering it on the stone floor. The chaplain did not stir, so she bowed her head, contrite, wishing, praying that he had not noticed.

When she stood after hearing the second reading – something from Paul’s letters from prison to the Philippians – she felt a tap at her shoulder. The chaplain was standing above her, his face still, his hand held out.

One by one the women were called to Confession. And as she walked out again into the garden, she felt as though her feet were lifting from the earth.

During the night she thought she was dying. Not a panic attack, just a conviction that the chaplain would find her on the foam mattress in the morning, lifeless. Things howled through the gaps in the putty around the window panes, around the walls outside. She felt grief in a spiralling darkness.

Every moment Mary found herself nearing sleep, she would jolt awake with the bells, which rung for the monks’ prayers every half-hour. The bells, she thought, those clarions of hell, in aid of – what exactly? The cleansing of the dark recesses of the soul, of the slurry of the heart?

She had no further concept of time, only that it was passing. No concept of herself, as she drifted between these bodily and spiritual planes.

Was this death, she thought, visiting itself upon me? What if I die here in this place, shivering in this turbulence?  She imagined herself speaking to her child, and thoughts rolled unfettered through her mind. What of the works I have promised you, to the world, to myself? Who will execute them? Will you take it upon yourself to sort through the parts of me, to piece me together again from these fragments of myself, from unfinished prayers, from miscellany? Will you bear it upon yourself to make me live forever, through everything, to make of me a monument, to remind yourself of me through your last days?

And what if you find of the parts of me of which I am ashamed, my unlovable parts, the hidden parts? In death I used to believe we knew everything, we would come into the full knowledge of everything, that no secret could be held forever, that all deathbed betrayals would be made known, all horrors leaked – and it would be all right, for we were all capable of horrors, for we were all capable of the worst kinds of things, of things unspoken, unthought, things omitted, pretended to be omitted.

She heard chanting. Prayers with the steady insistence of pulse-beat. She sat up. Through the window she could see lines of monks – twenty, thirty of them – arms linked, walking through the garden toward the dormitory. She couldn’t look away. The bell tolled.

She took a breath. At last she closed her eyes.

Nick Mulgrew is a British/South African writer and Mandela Rhodes Scholar. He is the 2014 winner of the National Arts Festival Short Story Award in South Africa, and a 2015 shortlistee for the White Review Prize in the U.K. His debut collection of stories, Stations, is forthcoming from David Philip Publishers in 2016.