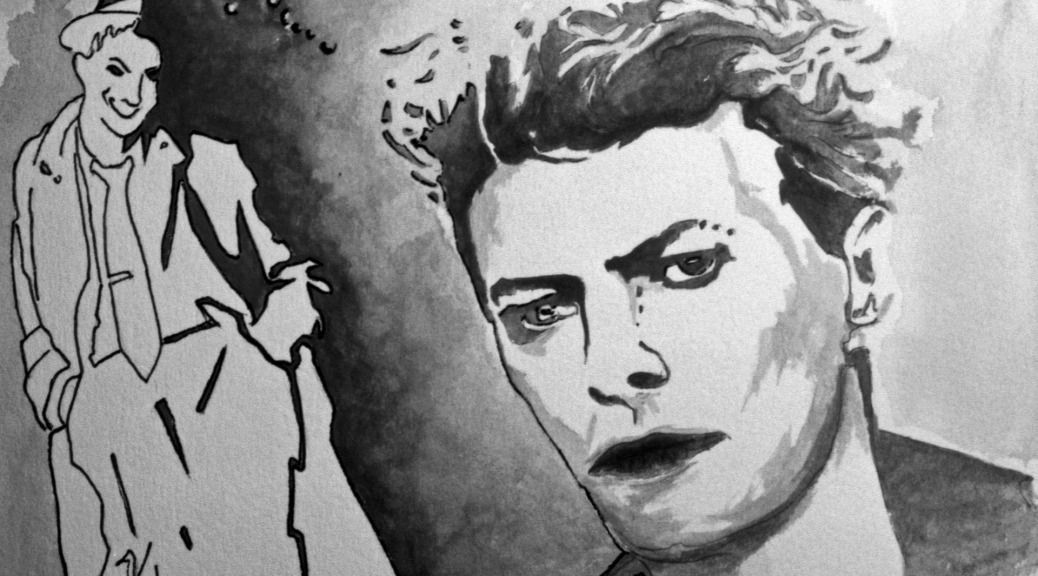 Did his body dictate his future or did he morph into the creature he wanted to be? Life gave David Bowie the sultry baritone of a lounge singer trapped inside a pale, thin body. It added a delicate, androgynous face and thick hair that styled perfectly in to a spiky mullet. And then in 1962, when he was only fifteen, a serious injury left him with a permanently-dilated pupil. At that point, did David Robert Jones of south London look in to the mirror – at his alien, teenage beauty and the two-tone eyes of a Siberian husky – and realize: I am destined for new worlds?

For me, the image came before the music. My introduction to Bowie could be found in the vinyl bins under letter B – after Boston, before Bread – at Sound Warehouse records, San Antonio, Texas. On a Saturday afternoon, this is where I could stare, gawk and study the wondrous being on the album covers. Is he man or woman, human or extraterrestrial? Those platforms are awfully high, that jumpsuit super shiny. Does he go to the store dressed like that? He’d get his ass kicked if he tried it here in our conservative suburbs. And then, one more lingering question I wasn’t yet old enough to answer: why am I drawn to him?

A good portion of the world has wondered the same.

Occasionally, in the years before MTV, you might catch a music video on late-night television, and if you were lucky, it would be Bowie in ‘Ashes to Ashes’ or ‘Fame’ or, even more rare, ‘Life on Mars?’ While the images were surreal and powerful and mesmerizing, the music didn’t affect me in quite the same way. He wasn’t my favorite is what I’ll say. But I was barely twelve, after all; I preferred Olivia Newton-John and (gasp) Kenny Rogers. I didn’t realize what was happening on a subconscious level, and I wasn’t ready to admit that, “Mickey Mouse has grown up a cow.”

But then, in 1983, Bowie released Let’s Dance and everything changed. His nationwide tour was massive, the videos (still vibrant and theatrical) popped up hourly on MTV, and everyone recognized the genius of co-producer Nile Rodgers. Plus, Bowie looked surprisingly hot in a suit. Back in the suburbs we Texans could even brag about him anointing our very own Stevie Ray Vaughan to play guitar. Though plenty of Bowie’s fans dismissed the album as commercial pandering, Let’s Dance attracted a new generation of admirers, myself included.

However, my awareness of his unique genius and influence grew slowly: over many years and after innumerable hours listening to the early albums (as well as the bands he inspired), watching movies like The Hunger and Merry Christmas Mr. Lawrence, and reading articles and interviews with the man. Bowie could be weird, vulnerable, muscular, sexy and soulful. Fearless and talented? Yes, absolutely. But also shrewd, cultured and – especially in his later years – funny (Zoolander, check).

At some point I realized: David Bowie is what happens when the bravest guy in the room decides to become a rock star. He never apologized, he never wavered, and not to overstate his impact, he changed the world.

Now, after decades of enjoying Bowie’s many gifts, I know I will remain closest to his songs. All of them! From the hits to the B-sides, the decadent ‘70s to the introspective 21st century. I say this because it’s too difficult to choose a favorite. Because there’s still so much to discover. Because, ultimately, while Bowie may have grabbed my attention with his hair and makeup and strange eyes, he earned my devotion with his music. I’ll miss him.

Jennifer S. Deayton is from Texas. She has lived and worked in Hong Kong for over 15 years, mainly writing, directing and video editing for TV, film and web productions (CNNI + food and travel shows). She has an MFA in Film Production from Loyola Marymount University. You can find more of her work at: http://www.hongkongbodega.com/ and also here on The Stockholm Review.