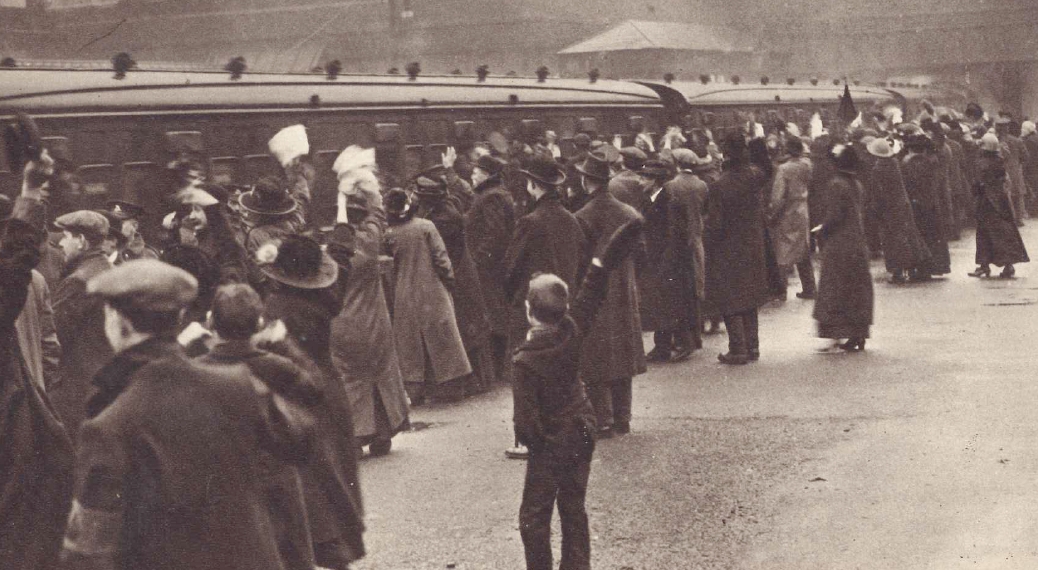 You once said you wouldn’t go back to the land of frozen lakes, but take a look around you now, what is that, if not a fraction of the Arctic Circle?

Perhaps you missed the northern lights or longed to hear snow crunch under your feet again. You close your eyes and feel the wind bite your face. Will seeing her a final time remind you how it hurts to smile?

You went to school in Korkalovaara, where a bag of marbles could buy you a higher place in the playground hierarchy. Small, blue planets of glass flew over the courtyard, collided, switched masters in a heartbeat.

You ran through the white woods with Pekka and Juha, clutching sticks between your arm and torso, hunting the Russian like your fathers hunted deer. In March there was still enough snow on the ground to jump from the roof.

Then one day the furious sound of metal birds filled the sky and you crammed in with fifty others in a dark shelter. You remember holding your breath while fondling the small bag of leather in your pocket.

You came home from school, Mother and Father stuck with their ears to the radio.

They put you on a train with a docket around your neck. It took you to the new country, to your new Äiti and Isä, where you learned how to speak like them, to live without midnight suns and autumn winters. They sent you to a new school where the children laughed at your every mispronunciation.

You waited impatiently to hear from home, asked: “When can I see my äiti again?”

Helga, you refused to call her “Mamma”, held you hard during your worst fits of anger. Every night the dreams were the same; mother’s face disappearing sideways as the train rolled off west.

One day Jukka came to stay. This scrawny city boy’s father had been killed in the Helsinki bombings. In him you found a new brother, but learned that Finnish was banned around the house.

In March, all the signs of winter had diminished. You rode a bike for the first time, taught your brother how to fish. Your tongue learned its way around your mouth. Jukka picked up too and soon you did not realise whether you spoke Finnish or Swedish.

The evenings were spent reading storybooks in front of the fire, but when the radio came on you would run and hide in your room. The picture of äiti in your head, her auburn locks and red lips, diminished too. When you tried to imagine her face, all you saw were the wrinkles around Mamma Helga’s eyes.

Five weeks to Christmas the telephone rang. It was your mother. She cried because Isä had been killed in the war.

“Poikani,” the tinned voice wept from the other side of the ocean. “Voi, poikani, voi, voi, voi.”

You didn’t recognise the cries, just stood there, awkward and motionless as your new family stared at you from across the decorated dinner table.

“Isä.” You tasted the word, tried hard to remember what it meant.

Now it’s time to board the bus that will take you to his grave. It has been too many years. The war has left Rovaniemi unrecognisable. None of the buildings in the city centre date back more than fifty years and their shapes remind you of Lego.

White trees whiz past you, it’s not yet two o’clock, but they are the only bodies illuminating the all-black. The bus is quiet. It will never occur to the native inhabitants to speak to each other in public, unless their words are of significant importance. Their silence is a northern language of its own.

When you arrive at the cemetery gates you stare down at your gloves and realise you’ve come empty-handed. Flowers wilt too quickly in this cold. You wait patiently, wait for the auburn locks and red lips to appear. But when the car arrives and the blonde miss leads an old lady and her wheelchair out of the back, you understand that age has washed away every sign of her ever being your mother. Her colours belong in the past.

She is slowly being pushed towards you now and you’re beginning to forget everything you wanted said.

In 1945 your mother got remarried to a widower in Turku. He already had three sons and did not think there would be room for a fourth.  You remember Helga’s anger when she received the letter. Jukka was sent back home but you stayed, with your mamma and your pappa and the fields of the south that were green instead of white. She sent you letters but with time the words got harder to understand. They ended up unopened in a drawer somewhere.

The blonde miss introduces herself as Sirkka.

“I will leave you to it, Tuula,” she says and goes back to the car. You are left standing in front of this stranger, when you try to speak nothing but misty clouds leave your mouth. She is old, but as you look closer you see the little, worried line in between her eyes, now accompanied by several others. And there she is, the woman you loved so dearly, who raised you and then let you go.

She raises a hand, urges you to take it.

“Poikani,” she says, “My son,” and her dropped voice bears no resemblance to the one that once lulled you to sleep.

“Tuula,” you reply, because anything else is inaccurate.

The cemetery is old, the gravestones buried in snow. The war tore so much of your land apart, but left this spot untouched. Somewhere here rests your father. A drop of melted snow, or is it a tear, is slowly finding its way down her cheek. You take her hand and squeeze it. Then you stand still and listen to the sound of snowflakes falling and you don’t say anything more. It is the way of the north.

Sofia Capel works as an editorial researcher in London. She is the former Editor-in-Chief of Londonsvenskar.com. She has an MA in Creative Writing.

One thought on “War child, by Sofia Capel”