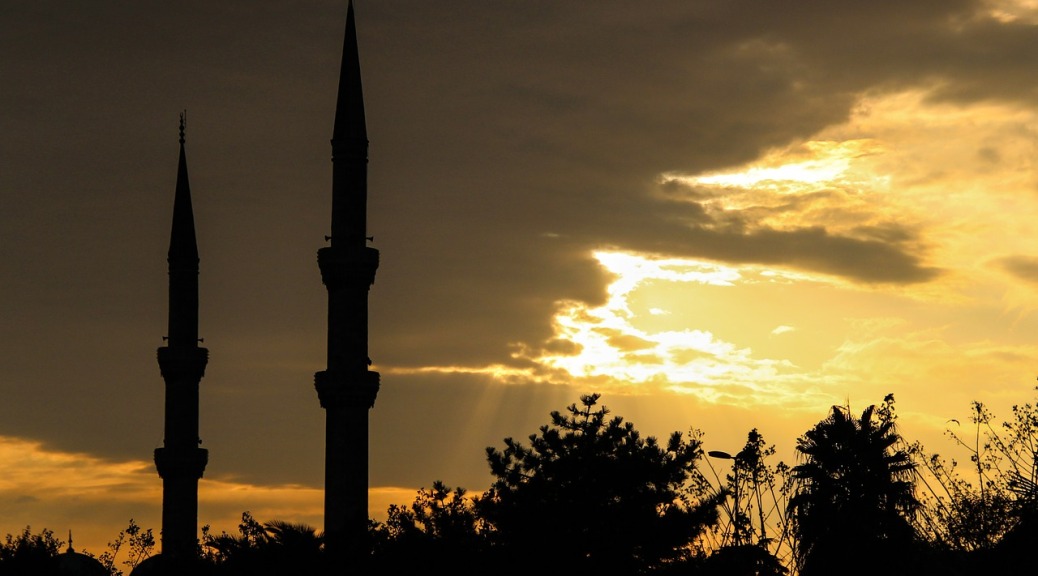 I moved to Istanbul in August, 2012. By the end of my first week living on the Asian side of the city, I noticed that four distinct calls to prayer ricocheted through the streets and apartment blocks of our devout, working-class neighborhood five times a day.

“An Imam used to climb up into one of the minarets to summon his congregation,” a local casually told me as I ate my first dinner beside the Bosporus. “Now they just play a CD.”

His wry observation was in the back of my mind a few days later when a new prayer – that is, one I was hearing for the first time – issued from the huge, bulbous mosque sitting at the foot of our neighborhood park. It was longer, slower, and much sadder than anything I’d heard during my first week here. During breakfast with a friend from the neighborhood later that morning, I asked her if I’d heard correctly.

“Yes,” she said, pausing to blow on the reddish-gold surface of her tea. “Imam sings this prayer when someone dies.”

Or more specifically, as our conversation would reveal, whenever a member of his congregation has died. Everyone in the neighborhood, or at least those believers sufficiently devoted to be known by their local Imam, would have one last song to accompany their crossing of that vast, solitary sea.

A few nights later, I rode a ferry to the European side of the city with a close friend who’d grown up in Istanbul. Walking past the midnight fisherman casting their lines off the Galata Bridge, we ascended the murderously steep alleys of Beyoğlu in search of a good drink. Too tired to walk anymore, we settled on a corner café skirting the edge of Orhan Pamuk’s neighborhood and sat at a sidewalk table out front. CNN was playing on the TV above the bar, though everyone seemed far more interested in each other’s company than the flashing screen.

“Look,” my friend said midway through our second drink, pointing toward the TV with his chin. “A Japanese journalist was killed in Syria. Yamamoto…isn’t that your wife’s last name?”

“It is,” I said. After unsuccessfully straining to hear more over the din inside, I refocused my attention on the night ahead.

My inbox pinged the next morning as I was looking for work online. My wife, who had stayed behind in the US to settle some last-minute details and planned on joining me in Istanbul in a few months, had sent me an email explaining that Mika Yamamoto, the journalist who’d been killed the day before in Aleppo, Syria, was her second cousin. I tried to process the news. I felt two things at once: intense familiarity and a seemingly unbridgeable distance.

As the articles about Mika swiftly accumulated online and in print, I learned that she had gained recognition for a Vice-style approach to reporting back when Vice was still a fledgling magazine in Montreal, utilizing handheld cameras and editing the footage herself. Among many assignments in war zones around the world, she documented the systematic oppression of women in Kabul and survived an American tank’s shelling of the Palestine Hotel in Baghdad in 2003, an incident that killed two and wounded three international journalists.

What struck me most, however, was her husband’s explanation regarding why she continued risking her life until the end. “I think it was her firm belief that you can stop a war with journalism,” he told CBS news. He also spoke about why she focused on children living in conflict zones: “I believe she wanted to tell the world how they are hurt, dead and bruised in their hearts.”

As the war in Syria intensified, I spent the rest of 2012 sitting at that same desk trying to finish my first book. Every so often, the same mournful song I’d heard my first week living in Istanbul would interrupt time. No matter what I was doing, I would stop to listen as a neighbor’s final song rang through the streets, over the small, white taxi vans carting the children off to school; above the mothers in headscarves and Nike running shoes walking arm-in-arm around the park for their daily exercise; past the unemployed backgammon players envisioning their next masterful play at the local men’s clubs; and finally alighting on the shoulders of the old couples sitting in teahouses enjoying what time they had left together before that song was their own.

I’ve since left that place where two distant relatives from opposite ends of the world came and never met, but if I listen closely, Mika’s life still wells beneath the darkness and fractures and distraction, singing on the lower frequencies: Raise your voice for others, it whispers, not just for those who you see yourself in, but for those living beyond the walls of your own congregation.

Nathan Gauer was born in Washington D.C. He is the author of Songs to Make the Desert Bear Fruit. He currently lives with his wife in Asuncion, Paraguay, where he is working on his first novel.