(Cover Art: Woody Allen trying to explain that young women are idiots – another example of the cultural Real)

A few days ago, I was in a book shop in Islington (north London) when I saw this… 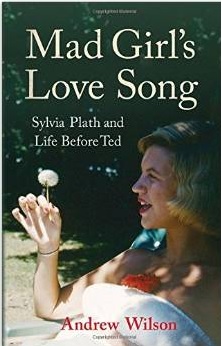 …which made me recall the following lines from Mary LéCuyer’s text “The Puzzle of Puzzles / And That We Call Being” (published in week 2 of our feminism series):

“The idea of creative genius has traditionally been aligned more readily with the male than the female, with those females emerging nonetheless often having their suicidal/depressive tendencies immediately critically highlighted. I learned ‘why not’ to read Plath (“dangerous”), before I met her poetry. The details of Hemingway’s passing (by his own hand, with a shotgun), on the other hand, I gathered long after I had read much of his work.”

Had I been a person who knew nothing about Sylvia Plath, had I never read any of her work, then I would, after that chance meeting a few days ago, have had reason to suspect at least one thing about her:

Interestingly, a quick google search for “Hemingway biography” yields no similar results – but then, why would it? Why would a biography about Hemingway suggest already by its very title that the man was loony? Because he committed suicide, like Plath? Because he was a macho, misogynist alcoholic? (I’m not saying that he was – but certainly, one of the duties of any sincere biographer is to show that the subject is more complex than the dozen or so tabloid headlines that have come to define his or her public persona?)

In the tradition of depicting and describing male madness, there has been a Byronic ideal to uphold. Men, when afflicted with insanity, are typically victims of circumstance and of forces outside of their control; they are geniuses whose creative and intellectual abilities separate them from the ordinary human being, and their madness is either prophetic or eccentrically charming. They are the Victor Frankensteins of Mary Shelley, the Dr Coppeliuses of E.T.A. Hoffman; they are the Strindbergs and the Nietzsches. In the tradition of describing female madness, however, there has been a tendency to employ a rather negatively charged vocabulary. Women are not so much afflicted with insanity, as they quite simply express inherent characteristics of their gender; they are emotionally unstable, sexually loose, and they lack the capacity of rational thought. They are the madwomen of Thornfield Hall, the hysterical Emma Bovarys, the psychotic Rebecca de Winters.

Frederic Jameson argued in Postmodernism or the Cultural Logic of Late Capitalism that it is pastiche, as opposed to parody, that characterizes postmodern culture. When cultural expression has absorbed consumer culture/pop culture/mass culture, and eradicated the difference between high and low, fine and base, then everything, presumably, becomes Text. Pastiche does not re-invent, but rather, it recycles and reproduces. “The historical novel,” as Jameson has it, to take an appropriately illustrative example, “can no longer set out to represent historical past; it can only ‘represent’ our ideas and stereotypes about that past […].” In the era of, say, the ‘dead author’, there is little that is unique or distinct about any attempt to narrate the human experience. With the view that all has been said and done, it becomes increasingly difficult for writers to escape the confines of the literary canon: in other words, to escape the texts that helped to create a cultural reality.

One of the great cultural challenges for human beings is to navigate through what Jameson, Jean Baudrillard and many other cultural theorists refer to as the simulacrum: that is to say, the notion that our image of reality, through cultural production, has been replaced by the idea of itself (the cultural text that replaces reality). In effect, originally false images of reality can generate new images that in turn are true (as when we start referring to the original lie — for example, when I go up to the counter at McDonald’s to complain that my Big Mac looks nothing like the one on the TV – what can the till operator possibly reply? “I’m sorry, sir, but there is no Real Big Mac. This is it. This is the Truth. The Big Mac you’re holding in your hand is the Real” — or when, as Baudrillard would have it, we refer to the Gulf War, a war that took place on The News rather than in Reality).

So, there we are. This, I think, is what we wanted our Feminism Non-Fiction series to be about. We wanted it to say something about the Real. Because that really is the fundamental challenge for feminism. To replace the lies that have become truth, with truth. If there is such a thing, if we’re able to see it when it hits us. I’m not sure we can (see the Truth), but I’m sure we can find a better lie to live by.

Lucie, Adrian and I wish to thank all who’ve contributed to this series. We’re so happy to have given a home to your work. Thanks, also, to all who’ve read the series, and who continue to read The Stockholm Review.

5 thoughts on “The Feminism Non-Fiction Series: An Endnote”