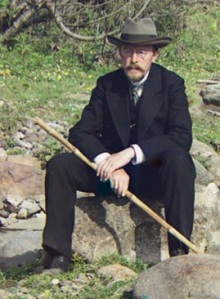 Looking a little like a Victorian Walter White and next to a silky river that doesn’t undulate as much as dimple, sits our hero. Grasping a bamboo cane and staring dourly into the distance, he seems far from someone to fuck with. This picture is a self-portrait of Russian chemist and photographer, Sergei Prokudin-Gorsky, from 1912. There’s definitely a marketing executive somewhere licking their lips at the prospect of calling this the world’s first colour selfie, but I would never dream of it. Look into that face and explain your favourite Buzzfeed post to him, I dare you.

To labour the Breaking Bad comparison, Prokudin-Gorsky was also a chemist; a student of Dmitry Mendeleev, he later became interested in photography and its colour-sensitisation. It was his famous photo of Leo Tolstoy that caught the attention of Tsar Nicholas II who sent him throughout the Russian Empire, by carriage, boats, train and horseback, to document the ambitious and varied infrastructure projects that were marching to the imperial swansong at the start of the last century. 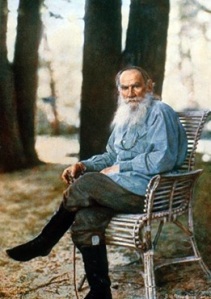 The fact that these vivid photographs come from a period which is usually associated with drab monochrome or otherworldly sepia makes them engrossingly fascinating, grounding the pictures and the period in a startling reality, like stumbling into an ancestor’s lucid dream.

Prokudin-Gorsky had an interesting technique to capture the necessary colours of his subjects. He would shoot the same scene three times onto plates of glass, using red, blue and green filters, before projecting the three together as a complete colour image. This is what gives his pictures the same retro look that makes the Instagram pictures of your plate of tiramisù look so unique.

Over the ten years he spent capturing scenes from across Russia, he took more than 10,000 photographs. The Tsar’s permission and funding afforded him the opportunity to document Russia in a way that was impossible until that point. He considered this collection his life’s work and continued until after the October Revolution.

At a recent exhibition at 22 Calvert Street in London, they described Prokudin-Gorsky as remaining “advisedly apolitical”, which seems to have been a great asset to him, as, in August 1918, he left to Norway, ostensibly to pick up photography supplies, and never returned. After this he travelled widely throughout Europe. He was celebrated for his discoveries and techniques, publishing papers and acquiring patents in Germany, France, Italy and the UK. He finally settled down in Paris where he had a daughter with his assistant and was eventually buried in the Sainte-Geneviève-des-Bois Russian Cemetery, alongside many aristocrats, artists and white émigrés. Here is a picture of Vladimir Putin giving them all a literal deathstare.

Jonathan King, often described as ‘a modern-day Benvenuto Cellini’, tried in vain to overcome his own pretensions by returning to the UK after years playing English teacher to the daughters of Bolognese industrialists. He’s currently living next to the beating heart of Central London, wishing it would shut up so he could get some sleep.

In order of appearance:

One thought on “The Tsar’s Photographer, by Jonathan King”